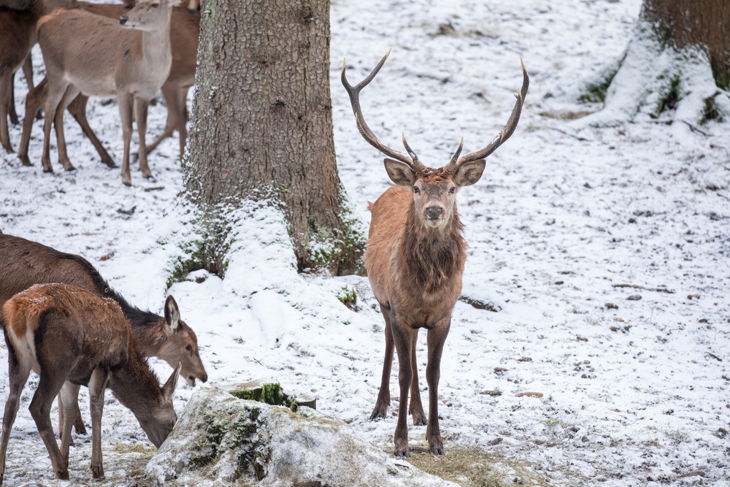 What Do Deer Eat In The Winter? How to Feed Deer During the Cold

When it comes to ensuring that you get the best deer for venison, then you shouldn’t only invest in the best hunting blind for concealment. You must feed the deer properly, too. But if it's out of your control, it's still important to learn about what they eat and how they survive. It has always made me wonder how animals, mainly deer, survive in the winter. I mean, what do deer eat in the winter when it's too cold to go out and feed them yourself?

After doing some research, I found out some remarkable facts and learned some tips on what you should feed them during the late season when given a chance. So read on to learn all about it!

What Do Deer Eat In The Winter?

While deer would eat the similar things during various seasons, it can also vary depending on its availability.

Food becomes scarcer during the cold months, and as a result, they will eat less because of it. While most deer scavenge food in plots or farms, some would also feed on corn or soybeans and cowpeas that lie on snow. This is preferable to avoid plucking standing stalks.

Some of the most preferred foods deer eat during winter include apples, maples, mountain maple, yew, wintergreen, sassafras, or basswood. They also tend to eat berries and various types of wood they see as a second choice. These foods include elderberry, mountain ash, honeysuckle, cucumber trees, wild raisins, and nannyberries. Elm, hickory, oaks, sugar maples, and wild grapes or black walnuts are also other second choices and are readily eaten.

When food is scarce, they choose pines or birches as their last resort. These types of food include scotch, red, or pitch pine, buckthorns, hawthorns, pin cherries, beeches, or sweet ferns.

But this is just a general list, and there may be a difference in palatability or preference, based on what the breed is and what species of deer they are.

Just like other animals in the wild, deer would adapt to the cold weather. They do not hibernate, but lessen their mobility and go through biological adaptations. They begin to change their fat storages, preparing for the winter months by storing fat around their organs to insulate their body and providing energy reserves. Their fur also begins to change as well, with its insulating value increasing to trap more air for warmth. Besides that, the sebaceous glands in their soil will produce oil, which coats hair filaments for temperature regulation during the cold months.

As for their behavior, they will start decreasing their movements to lower their metabolic rate, which then reduces their food intake. They will also seek shelter in conifer stands, which have fewer wind speeds and snowpack. They also have a thermal cover, which helps regulate their temperatures.

Read more: Chicory for Deer: The Facts You Need to Know and How to Plant It

Tips On Feeding Deer In The Winter

Now that you're familiar with what deer eat in the winter, how can you feed them efficiently to maintain their weight and body? Here are some tips to follow:

Here is an excellent video on how to feed deer in the winter:

Knowing what deer eat is crucial when hunting, as it determines their weight and how they survive the harsh winter. And once you know about what they eat during these times, you can also feed them to sustain their weights for hunting in the future.

I hope that this article answers your question: "What do deer eat in the winter?" Now that you are familiar with what they usually eat during the cold seasons begin plotting crops and knowing where to situate your deer feeders today.

If you have any questions or would like to share your tips and experience when feeding deer in the winter, then comment down below. I would love to hear what you have to think.