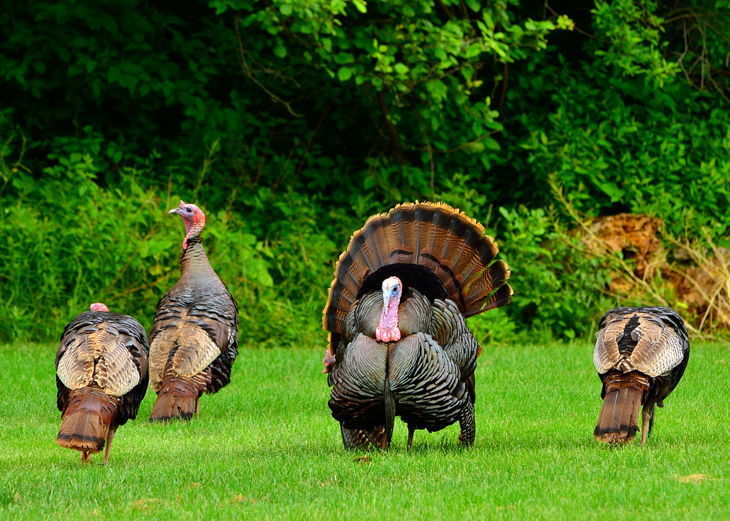 Turkey’s Mating Season: A Guide to How They Breed and When to Hunt

If you're planning to hunt, you have to learn all about your game. It doesn't matter if you're a beginner or skilled in the activity. So if you're hunting for turkey, you should know about the times they are usually out and when they mate, so you're able to plan out your hunting strategies and have a successful day in the field!

One of the things to learn about? The turkey's mating season! How do they operate? Where do they go? How can you hunt better during this time? I answer all these questions and share you the best tips to follow, so read on!

Why Should You Hunt During Mating Season?

You're probably wondering: Is it that beneficial to hunt during the turkey's mating season? The answer is YES! It's actually one of the best times of the year to hunt turkey, as they are usually flocking around looking for partners to breed with. I usually take advantage of this time to get a few big turkeys. And because of the many types of products that can be used to conceal and attract, I enjoy it even more and can tailor my tactics to this time of the year quite well.

However, there is more to hunting toms and hens besides scheduling your hunts during the season. You have to ensure that you fully understand the phases they go through and how they act so you know how to attract the good turkeys and when to pull the trigger! I'll be showing you the complete breeding process in the next section.

Discover more: Where to Shoot a Turkey With a Bow: What You Need to Know to Get the Sure Kill!

A Guide to Turkey's Mating Season

Now that you know all about why it's beneficial to hunt during the mating season, let's start learning all about their patterns of breeding!

The turkey's mating season usually begins in February for those in soothers regions. In the northern regions, it begins between April to May. Their urges to breed are triggered because of the increasing daylight hours, which would stimulate a tom's sex hormone.

There are actually three phases during the turkey mating season, all of which have the turkeys acting differently. But it all boils down to a gobbler wanting to breed with a hen, especially during the early to mid-season.

During the first two weeks of the spring season, this is the notable transition for wild turkeys. This is when the winter flocks begin to break up and when you will start hearing more gobbling.

You'll find that gobblers and hens are in breeding areas already, which are led by the older hens returning to areas they nest in. This is the period when there is a lot of gobbling and noise, with hens even becoming more vocal. Some goobers are chasing each other around, while hens are also fighting with one another, too! Wild turkey strutting for a mate in the spring mating season.

It is during this period that your calls will be very effective, especially towards unattached toms or flocks of jakes. They will run towards every realistic hen sound they hear because of their foolish lusts.

This is the reason why I love hunting during this period. The flocks begin to separate, toms and jakes are more gullible and attracted, it's so easy!

Discover more: What Does a Turkey Sound Like? 10 Different Calls to Know About!

During the second period, turkeys are more or less settled in with the spring season. There will still be gobbling, particularly during the dawn. However, it won't be as much as the first period. It will actually be short-lived and sporadic.

Furthermore, toms aren't as aggressive as they were towards each other previously. They do not challenge each other directly and aggressive hens are playing the dominance card, taking places in their pecking orders.

Basically, this is the period when toms are already breeding with hens. That means turkeys won't answer your calls, or if he does, he will follow with his harem and keep his distance from you. This is because the toms would stay close to hens all day, roosting closely throughout the night.

It is during this period that you might notice toms doing a sort of courtship dance. Males would fan out their tail feathers and raise body feathers as they dance around, meant to entice females for mating. An attracted female would lower herself in front of the turkey.

Turkeys mate with the male hopping on the female and the sperm will transfer from the male to female cloaca (a vent leading to a turkey's sex organ).

In my opinion, this is the worst period to hunt in, as it will be difficult to call the henned-up toms. But that doesn't mean it's impossible! Sometimes, boss gobblers or those lost from the herd can be vulnerable to your calls. You just need to know when that happens so you can take advantage of it.

Additionally, hens would start going to their nests to lay eggs, then join toms for breeding. So during the mornings (around 9 AM), you can attract some turkeys who gobble.

During the end of the mating season, you'll find that there's one more gobbling peak. Besides the early period, this is the best time to call in wary toms. Why? Because hens will be incubating on their nests, while gobblers are still lusting for a hen.

Hens will lay an egg in their nest daily for up to 11 days, with it taking around 28 days for the eggs to hatch. So while hens are busy tending to their eggs, males are out still looking for a partner!

With that being said, they will be vulnerable and respond to any hen calls, including your own! However, there are some circumstances that can make turkeys suspicious, such as calls made in heavily hunted areas during the first period. Also, older birds may vacate the nests from the predation or inclement weather.

Despite these variables, it's still a greater time to hunt compared to the mid-season.

Learning about the mating season of turkeys is one thing, but how can you implement what you learned in the field? Here are some helpful tips on how to hunt turkey during the breeding times:

Check out this informative video on more advice when hunting turkeys during the late season:

When it comes to hunting, you have to make sure that you know what you're about to capture. Through knowing the way they act (depending on the season), you'll be able to strategize better and have more success during the day. Turkey mating season can get quite popular for hunters, which is why you have to learn everything about it to know how you can attract toms and hens!

Hopefully, this article helped you become more knowledgeable about the turkey's mating season. So don't wait any longer and start learning more about your game now!

If you have any questions or want to share your tips and experiences when hunting during the mating season, then comment below. Your thoughts are much appreciated.