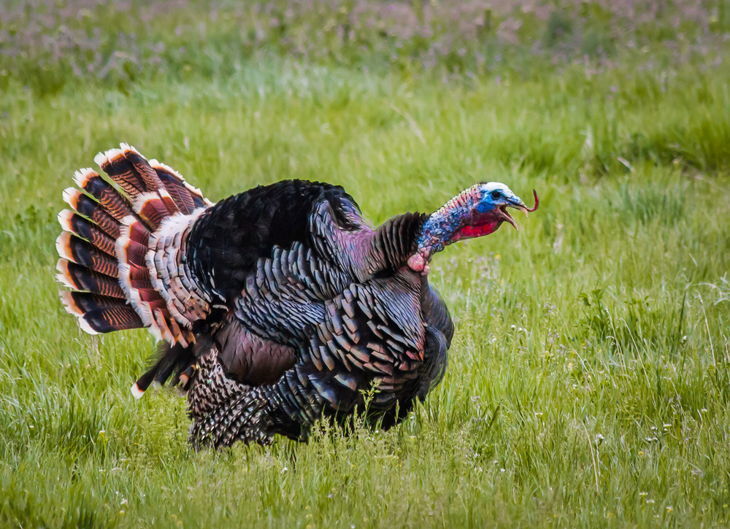 What Does a Turkey Sound Like? 10 Different Calls to Know About!

When hunting turkeys, there are so many things you need to know about them. From learning the turkey's mating season down to how to use their decoys, these vital facts of information will help you learn how to properly attract and capture them. One of the important things to look into: How they sound!

We've all probably wondered: How does a turkey sound like? They don't just "gobble" as many of us know. There are actually a ton of calls and sounds they make that will help us understand what they feel to strategize how we hunt!

So if you're wondering about it, read on as I show you everything to know about turkey sounds.

The Importance of Knowing Turkey Calls

You're probably wondering: Why is it so important to learn about what sound turkeys make?

This isn't just so that you'll be able to detect where turkeys are based on their sound. Learning and identifying the sounds they make can help you learn what they are feeling and how you can "talk" with them through your calls. That way, you can calm down a turkey or lure them into your area, which has you capture them thanks to your ears and choice of calls.

Take note that there are quite a lot of sounds a turkey makes, which is why it's crucial to acquaint yourself with most, if not all, of them.

Discover more: The 7 Effective Ways on How to Go Turkey Hunting In the Rain

They don't just have one call! I'll be explaining the MANY different sounds they make:

This is one of the most heard sounds from both the male and female turkey. It sounds just like its name, coming in a series of notes and usually in a series between three to eight. This gives other birds a signal of their location, screaming out, "everyone, I'm right here!"

It's also a common call used when hens look for toms, which is why it's crucial to learn how to use and listen to this sound.

Tree yelps are used by roosted hens to let others know that she's awake and looking for a tom. It's a softer yelp and a key to drawing gobblers to you.

Clucks are calls used by hens and gobblers. When gobblers cluck, it indicates their location, kind of like saying "Hi, I'm just right here!" It comes in a slower cadence, usually with a yelp or on its own.

If a hen clucks, it shows a similar meaning like the tom, in conjunction with moving around or feeding. Clucks may be confused with putts, which is why it's important to know the difference between both.

A putt sounds very similar to clucks, but with a very different meaning! You can hear this in fading sequences, as it's usually used when turkeys are running away from you or other predators. It's a sound they make to signal others to get out of the area because of something dangerous nearby.

The putt sounds shorter than a cluck and in an excited, panicky cadence, especially when the turkey is on high alert.

This is a series of fast and loud clucks that are mucked with some yelping. This type of sound is used when hens are fired up, best to use when gobblers have become silent as you'll get a quick response and toms coming to you.

However, do not overdo this call as silent toms might be nearby and hearing a series of these too many times can be suspicious for them!

One of the best ways I can describe a purr is like someone humming or whistling, simply minding their business. Just like felines, it signifies the contempt of the animal. You'll usually hear this sound as turkeys feed or maintain contact with each other.

But, sometimes toms can purr as signs of aggression if another gobbler is invading another gobbler's area or trying to force one out. You might actually hear this from gobblers eyeing your turkey decoy!

This is also known as a "fly-down cackle," usually heard when turkeys leave the roost and "fly down" to ground. They'll start by doing a tree yelp, showing where they are. Then, as they are about to leave the roost, they'll cackle.

This sound begins as quick cuts and clucks, then a slower cadence when the turkey lands on the ground. The sound is also accompanied by the flapping of winds, indicating that you're early enough to start hunting.

This sound is used during the fall when flocks of turkeys are separated and young turkeys are trying to go back to their mother. It shows that a young turkey is lost and wants to look for their mom or familiar turkeys.

This sound is a series of yelps (or at least, attempted yelps). You can hear high-pitched sounds and this is best to use when a flock of turkeys is separated, attracting mature toms and hens.

We all know about gobbling, which is a sound many hunters want to hear! This indicated that male turkeys are excited, wanting to mate with a hen. The sound is used to attract hens or to deter jakes and toms.

You'll know the difference between jakes and toms, as the jake sometimes yelp when responding to a gobble.

Tree calls are a series of soft and muffled yelps, usually done by roosted birds. This sound can pick up in volume when the fly-down time nears (which I explained above). Tree calls might be accompanied with soft clucking and is usually a call when communicating with others, similar to the yelp.

Usually, it's to let gobblers on the roost know your location and that you exist!

10. Other Sounds From the Woods

Besides these calls, there are also other sounds to take note of, such as the crow call and owl hoot!

The crow call consists of harsh notes that sound similar to "caw," a good locator call to get toms to shock gobbles.

Owl hoots are used to locate toms in the early morning or late evening, drawing shocked gobbles. It gets birds to gobble without having to use turkey sounds!

Tips on Attracting Turkeys Through Sound

Now that you know about the different turkey sounds, how can you utilize your calls to attract your next catch? Here are some helpful tips to follow:

For those who are planning to capture turkeys for their next big dinner or centerpiece, then there are many things you have to learn about them to catch a big one! By knowing the way they sound, you'll know how to communicate with them through calls and attract them for your next big catch.

Hopefully, this article answers your question, "what does a turkey sound like?" Now that you know the answer, start strategizing your next hunt now!

If you have any questions or want to share your own experiences when listening to turkeys, then comment below. Your thoughts are much appreciated!