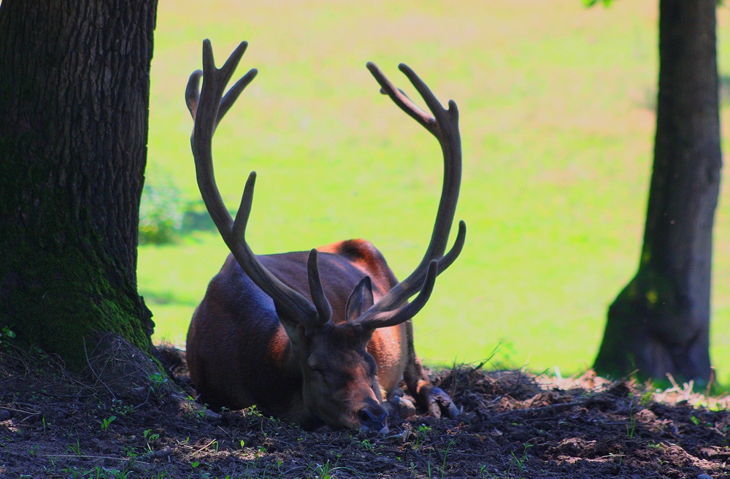 Where Do Deer Sleep? The Important Facts You Need To Know

According to the insidebedroom site animals and humans need to have enough sleep to stay healthy. Just like us humans, deer will need a bit of sleep as well! After all, how will they be able to jump great heights or run very quickly without the energy they get from resting? There have been little studies or observations said about the sleeping habits of a deer, as we would usually focus on their action! But it's high time to know about their sleeping conditions and answer the question: "Where do deer sleep?"

To help you answer that question, I'll be talking about their sleeping habits. So do read on to learn more about the deer and how they rest.

Where Do Deer Sleep?

So, when and where do deer sleep, exactly? Is there an exact time and place?

Even when sleeping, deer make sure that they still stay undercover and out of sight from predators and hunters that may be lurking in the night. That is why deer would look for bedding areas that look and feel safe, which are usually areas that aren't posed and had good cover.

Deer would tend to also look for sleeping locations that have them take advantage of winds and thermals, which helps keep them warm. They would sleep in areas near food sources as well. These areas are usually tall grasses, dense and brush foliage. But while this keeps them warm and hidden as they sleep, it would also leave physical impressions, which one can use to track both habits and movement of deer.​​​​​ Deer sleeping on the grass

As for the times they sleep, it would vary. But you'll be surprised to know that deer sleep more so during the day and have peak movement either before sunrise or after sunset. But of course, this would depend on the season. Generally, deer are more active during the night compared to the day, despite it being warmer during the daytime.

When winter comes, deer would sleep in direct sunlight as a way to stay warm, then move around to avoid and detect any predators that may come their way. They would look for bedding areas that have side covers, high ground, and easy entrance and exits. During the summer, they shave open bedding areas for the cool breezes and avoid the bugs.

Take note that when deer find a good spot to sleep in, they would stay in that same spot for sleeping repeatedly. You can find out where deer sleep by checking these areas and see if it left impressions to track where they go.

Read more: What Do Deer Eat In The Winter? How to Feed Deer During the Cold

How Do Deer Sleep?

Now that you know when and where deer sleep, what do they look like? This is important to know so you can distinguish a sleeping deer from one that is still conscious.

You have to take note that deer may not be sleeping, even if it appears to be. You will know if the deer are bedded if it's resting and chewing a cud. Many experts have observed various sleeping positions and habits deer have when resting. Some would have their noses tucked up under hind legs, or some are on their sides with their heads up. Deer would also sleep with their eyes closed or open. If you're wondering how long they sleep for, the answer would vary. But one thing's for sure: They don't sleep very long! On average, deer would sleep for around five to ten minutes. Some trail cameras have shown that deer can sleep for almost 20 minutes at a time. Their usual sleep cycle is to doze then snap to attention.

While you may think that deer are most vulnerable when sleeping, that's where you're wrong. They've got swiveling ears and a strong sense of hearing, so they know what's happening around them even when resting. So if they hear even the slightest of noise, they can quickly wake up and bold out of there.

You usually won't be able to see sleeping deer, as they either bolt out of the area before you do, or you are in the field during times they are only awake (there are state regulations that have certain legal hunting times). But if you do happen to see one dozing off, do take the time to observe and see their sleeping habits, as it helps you learn about their movements!

Read more: Are Deer Color Blind? The Answers You Need to Know!

Here is an excellent video showing you about what deer look like while they sleep:

When it comes to being an efficient hunter, you should know all about your game before shooting it down. This helps you make sure that you know where it will be and its next movements, with can help you decide your next hunting strategies to catch a big one!

I hope that this article answers your question: "Where do deer sleep?" Now that you know the answer, begin planning your hunt today!

If you have any questions or would like to share your tips and experiences on hunting deer when sleeping, then comment down below. I would love to hear what you have to think.