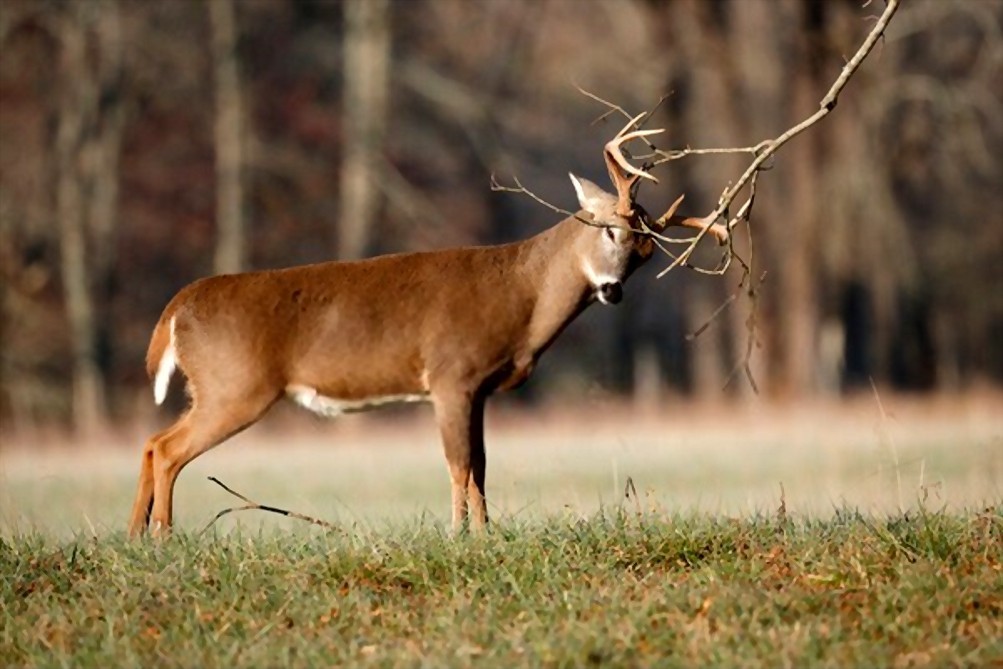 Why Do Deer Rub Their Antlers On Trees?

For the animal world, both scent-marking and granular secretions are an important communication role, even more, important compared to vocalizations and visual signals sometimes! This is because scent marks can provide the extension of animals themselves, remaining functional even after the annual left the area.

That’s where deer rubs come to play, one of the main scent-marking behaviors. But exactly why do Der rub their antlers on trees in the first place? There are different reasons why so read on to learn their ways of communication through rubs, which go beyond the usual calls and short-range actions.

Why Do Deer Rub Their Antlers On Trees?

You have probably seen deer rub on trees and shrubs, especially those with smoother bark and without lower limbs. The measurements also matter, with bucks rubbing saplings fewer than two inches in diameter. Older bucks rub trees over six inches in diameter, while younger ones re-rub the same trees.

In Southeast areas, bucks would prefer rubbing on aromatic species like sassafras or cedar. However, they would also rub on answers, cherries, striped maple, pines, and the like.

In Northeast and the Upper Great Lakes regions, you can find them rubbing on trembling aspen because of its soft and smooth bark. Besides this, they would rub on red maple, black cherry, pines, willows, or balsam fir. Deer would avoid sugar maple, beech, paper birch, or ironwood.

But why exactly does this happen, and why only on particular trees?

Deer are either removing antler velvet, which is a process that takes about 24 hours. However, only very few bucks do it for this reason.

Most rubs are made by dominant bucks for signaling their readiness to breed, as well as to proclaim control over certain areas. This is because rubs are supposed to be eye-catching, anointed with the scent of the maker.

They have specialized forehead skin glands, which are even more active during the fall season. In fact, tests show that socially high-ranking bucks would produce more glandular secretion compared to younger deer rubbing on trees.

Dominant bucks are the main signpost makers, messaging senders in a herd, with younger ones as the readers. The chemical signals in the rub would suppress the sex drive and/or aggressiveness of males. For females, these signals stimulate them, synchronizing breeding cycles.

Because of this, older bucks and signposts would maintain the social order of a certain area. So the primary reason Deer rub on trees is either to remove velvet OR as a way to communicate, particularly during mating season or to exert their dominance.

More to Know About Deer Rubbing

When deer rub on trees, it shows that bucks are readying themselves for the rut period, marking territories and announcing their presence to fellow deer, especially doe. But what else is there to know about deer rubs?

The times' deer rub on trees and their surfaces is actually triggered by fall's shortening days. Besides the prolonged velvet-shedding season around the South, the peak shedding dates would vary around the US, though only by a few weeks.

In northern areas, bucks rub off velvet in late August to early September. In southern areas, mature bucks would strip velvet in mid-September. Some young bucks or unhealthy mature deer may experience delays on shedding by a few weeks.

After this period, mature and dominant bucks would start marking their territory, happening mostly in September.

How Much Do They Rub

The amount of rubbing bucks would do on trees depend on their levels of testosterone in the blood. This is determined by the deer’s age and its dominance status.

For prime-age bucks in healthy condition, they would be the first to reach that threshold of testosterone levels which result in velvet shedding. They would also have higher concentrations of testosterone, which is why they are extremely aggressive, have a higher social rank, and will make more rubs.

For healthier deer ranges, the rub densities can go from a few hundred to thousands for every square mile. There are various factors that contribute to the rub densities in an area, such as the deer herd's overall health.

Are you still curious about how deer rub on trees? Check out this informative video to learn more!

It’s crucial to learn more about the way deer communicate, especially the long-lasting forms of communication such as deer rub. By learning why deer rub their antlers on trees and more details on how they do it, you’ll be able to learn more about deer behavior. That way, you can track them easier for a successful hunt!

I hope my article answered the question, “why do deer rub their antlers on trees?” Now that you know the answer, learn more about the deer’s way of communicating!