Once upon a time, it was either a binocular or nothing. This tool was widely embraced by hunters for sporting a kill in the wild. On the other hand, thermal imaging was primarily used by the military and hardcore law enforcement agencies while on the field.

But a lot has since changed and the affordable cost of infrared technology, thanks to recent developments, has led to the widespread availability of consumer-level thermal imaging devices.

Unfortunately, if your loves for hunting dates back to the 80’s and you have not kept up with modern trends, then you may not see much use for a thermal monocular. To help meet this need, we have put together some interesting reasons for an infrared monocular in your next hunting adventure.

One Device For Night And Day

Imagine having a single scope for spotting a deer in the day and highlighting hogs under the night cover.

Well, thermal imaging cameras provide exceptional nighttime vision that will help you to find animals in total darkness. But not only that, they are also come in handy during the day.

Unlike image-magnifiers, a thermal monocular works both under the heat of the sun as well as in complete darkness.

As most hunters know all too well it is almost impossible to track a young deer in the darkness, a handheld thermal imaging camera is well suited to spot a game in all weather conditions, especially in complete darkness.

Finding a well camouflaged game can prove very challenging out in the wild. Rabbits hiding in the edge of briar patches or boars camouflaged with the surrounding means a longer wait for the hunter.

Things get a lot easier if you have a thermal imaging camera. In simple words, a thermal monocular is extraordinarily useful to spot clever animals and even distinguish which animal is within your scope.

After using a thermal monocular for a while, you will soon wonder how your back survived all those years hunched over scanning in circles for a game.

For hunters, the thermal monocular can be very useful when trailing a deer after the shot has been fired as well.

A lot of times, the game will bolt away despite been hit by the shot and it can be difficult to track them in a few scenarios.

Obviously, you could get on the blood trail as is the common practice, but a thermal monocular will make your tracking more efficient. It gets even better in the dark where your vision will probably fail and only a good bloodhound can save the day. However, with a thermal monocular, blood sticks out plainly, and it is easier to read the heat signature of a wounded animal.

To put it simply, a thermal camera is your best companion in tricky situations.

Scouting for prey at night is a great cover for the skilled hunter but it also puts the hunter at a disadvantage – poor vision.

To rise above this downside, hunters resort to gadgets that emit light for better visibility. Unfortunately, this means alerts the prey and further makes it more difficult to catch a game unawares.

Thermal imaging provides that stealth mode that helps a hunter to keep a worthwhile distance from the prey without exposing themselves. 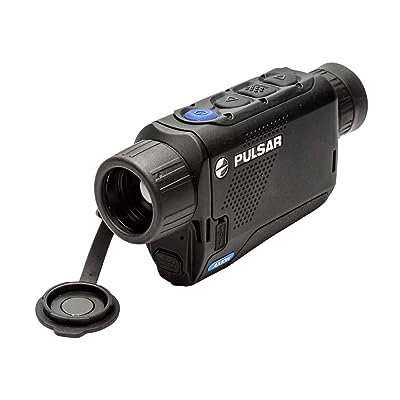 With a thermal monocular like the Axion Pulsar thermal scope, you can hunt in absolute silence and from a respectable distance from the prey that keeps you out of harm’s way.

These devices help to keep a camouflage thus putting you at an advantage over the prey.